AllHigh School
Posted by Keith Conning at 11:01 AM No comments: Links to this post

National Athletes of the Week Include First-Ever NJCAA DIII Winners

National Athletes of the Week Include First-Ever NJCAA DIII Winners

NEW ORLEANS— Explosive performances at the Texas Relays and historically great Division II performances headlined the second National Athlete of the Week awards for the 2015 college outdoor season.
The U.S. Track & Field and Cross Country Coaches Association (USTFCCCA) announced the awards on Tuesday.
Included in the honorees were the first ever National Junior College Athletic Association (NJCAA) Division III winners.
Ten winners this week; they were Michael Stigler of Kansas and Alex Gochenour of Arkansas for NCAA Division I; Hendrik Nungess of Texas A&M-Commerce and Emily Oren of Hillsdale for NCAA Division II; Tyler Bauer of Muhlenberg and Frances Loeb of Johns Hopkins for NCAA Division III; Jean Soutein and Danielle Riggins of Iowa Central for NJCAA Division I; and Walter Briggs of Delhi and Pam Watson of Rowan-Gloucester for NJCAA Division III.
Click each of the student-athletes’ names above or keep scrolling below to read about the exploits that made all eight worthy.
National Athlete of the Week is an award selected and presented by the USTFCCCA Communications Staff at the beginning of each week to eight (male and female for each of the three NCAA divisions, plus the NJCAA) collegiate track & field athletes.
Nominations are open to the public. Coaches and sports information directors are encouraged to nominate their student-athletes; as are student-athletes, their families and friends, and fans of their programs.
The award seeks to highlight not only the very best times, marks and scores on a week-to-week basis, but also performances that were significant on the national landscape and/or the latest in a series of strong outings. Quality of competition, suspenseful finishes and other factors will also play a role in the decision.

Senior | Canyon, Texas
Stigler won the Texas Relays 400 hurdles in a world-leading time of 48.44 seconds, which would have made him one of the top ten performers in the world each of the last two years. That time carries a suitcase of superlatives: it’s a stadium, meet, and school record, the fastest NCAA regular-season time since 2011, and the eighth-fastest time ever run in March.
He absolutely dominated the hurdle final in Austin, beating UTSA’s Keyunta Hayes by over a second. The race must have brought Stigler ample relief–it was his first PR in the event since 2013, and with no long hurdles indoors, he spent the winter pursuing secondary events, including a 1:54 debut in the 800 meters. Stigler has been the runner-up at NCAAs in the 400 hurdles each of the last two years.
Honorable mentions: Shawn Barber, Akron and Trayvon Bromell, Baylor

Junior | Missouri Valley, Iowa
Gochenour won the heptathlon at the Texas Relays with a score of 6027 points, which is the best NCAA regular-season score since Brianne Theisen’s 6353 in 2012. The junior set personal bests in the 200 (wind-aided), shot put, high jump (outdoor best), 100 hurdles, long jump (wind-aided)–that’s five out of seven events–en route to beating her old career best by more than 500 points. She missed Makeba Alcide’s school record by just 23 points. As our Kyle Terwillegar pointed out, she would have PRed even if she skipped the javelin, and probably would have cracked the college all-time top ten if she didn’t come about seven meters shy of her javelin PB.
Honorable mention: Quanesha Burks, Alabama and Irena Sediva, Virginia Tech

Sophomore | Heusenstamm, Germany
Another week, another nationally elite TAMU-Commerce throw. A week after his teammate Masoud Moghaddam was recognized for his exploits in the hammer, Nungess is the NAOW for having the best javelin throw at the Texas Relays. He launched the spear 73.24 meters (240-3); though he was competing in the "B" section, it would have won the "A" section, which contained several Division I first-team All-Americans.
That throw of 73.24 makes him the sixth-best college thrower at any level this year, and the fifth best javelin thrower in Division II history. It also breaks a Lone Star Conference record that had stood since 1988.
Honorable mention: Drew Windle, Ashland

Junior | Holland, Michigan
After impressive double national titles in the 3k/DMR indoors, Oren made history in her outdoor season debut. She smoked a mostly Division I field in the steeplechase at the Raleigh Relays in 10:04.79, winning by thirteen seconds. Oren is now the third fastest steeplechaser in DII history, and per Hillsdale, set the NC State facility record. It’s very, very early, but Oren has the fastest time by a collegian or an American in 2015, and the tenth fastest time in the world this year.
Honorable mention: Heavin Warner, Central Missouri

Senior | Northampton, Pennsylvania
Competing at the Lafayette 7-Way Invitational, Bauer added his name to the Division III all-time top ten lists with a winning javelin throw of 68.64m (225-2) – a PR by more than three meters. It was his very first throw in a meet since finishing sixth at 2014 outdoor nationals, and it made him the tenth best performer in DIII history. Bauer broke a nineteen-year-old Centennial Conference record, is the DIII national leader, and currently sits seventeenth on the all-college list.
Honorable mention: Darren Centi, Redlands

Senior | Wynnewood, Pennsylvania
Loeb covered 10,000 meters in 34:42.63 at the Raleigh Relays, good for the fastest DIII time and the ninth-fastest time by a collegian in 2015. Racing against mostly Division I and II competition, she broke a twelve-year-old Centennial Conference record by nearly a minute, and the Hopkins school record by over seventy-five seconds. Loeb did all that in her first 10k since 2013.
Honorable mention: Buffalo State 4×400

Freshman | Homestead, Florida
After taking just 22nd at indoor nationals and failing to break forty-eight seconds indoors, Soutein skipped the 47s and 48s entirely at Arkansas. He vanquished a mostly NCAA Division I field with a NJCAA-leading 400 time of 46.94 seconds–the tenth fastest by any collegian this year.
Honorable mention: Jahrod Henderson, Colby CC

Freshman | Racine, Wisconsin
Competing at the Arkansas Spring Invitational, Riggins turned in an extremely impressive triple. She won the 200 in 23.65 seconds, took second in the 100 hurdles in 13.80, and ran a leg of the runner-up 46.12 4×100 meter relay. The open times are NJCAA national leaders, while the relay is currently the second fastest by a junior college in 2015.
Honorable mention: Gleneve Grange, New Mexico JC

Freshman | Kingston, New York
Briggs set the NJCAA DIII-leading mark in the 400 hurdles, beating the field at the Wagner Invitational by nearly two seconds. He covered the lap in 56.83 seconds, automatically qualifying himself for nationals.

Freshman | Haddon Heights, New Jersey
Watson won the javelin at Widener’s Danny Curran meet with a division-leading toss of 40.62m (133-3). Though RCGC is DIII (say that ten times fast), Watson’s mark is actually the best by a women’s javelin thrower in the entire NJCAA this season, per TFRRS. 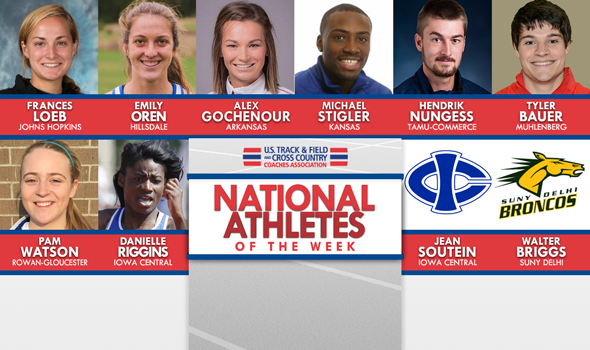 
Posted by Keith Conning at 9:58 AM No comments: Links to this post


Posted by Keith Conning at 9:41 AM No comments: Links to this post